Hitler was financed by @FederalReserve and @BankofEngland 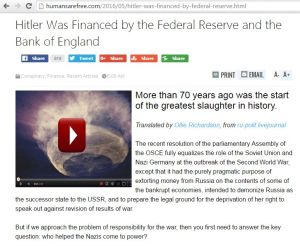 It takes a ‘niche interest’ to want to study how the world has been duped and deceived into what’s so dishonest about our money system.

And it takes a historian who wants to know the truth:

Yuri Rubtsov is a doctor of historical sciences, academician of the Academy of military sciences, and member of  the International Association of historians of world war II.

The result is this article:

An excellent time line of four roughly 5-year stages, starting 1919, and an important account of the key players in finance and in industry.

WHICH SIDE are You On: Rothschild (City) or Treasury (Westminster)?

I shouldn’t be asking the question: which side are you on: Rothschild (City) or Treasury (Westminster)? For the current Treasurer trained in Rothschild banks, as I once read, but can’t find any reference any more…

A lot of us believe that it would be nice if Parliament became an ethical outfit in 2015 and knew what the real issues are:

This is therefore an important email from Justin Walker (jrgwalker@aol.com), the Coordinator for the Restore the Bradbury Pound Campaign:

Sorry, but I’ve been doing a lot of quiet thinking/research in the last couple of weeks.   Dangerous I know!  But I would be grateful if you could spread this email out far and wide to get this very important information out, especially as the world will be looking in detail at this period of history next year.

Now I have one big question-mark about the actual 1914 story of the debt-free, HM Treasury-issued Bradbury Pound which has been nagging at me ever since I was first alerted to this little known episode in our country’s history.  It has nothing whatsoever to do with the concept and the principle of a sovereign nation issuing its own debt-free currency based on that nation’s credit.  We all know that the restoration of the Bradbury Pound is our lifeline and trump card to a more sane and prosperous future free from the criminal bankers.

No, the question which is bothering me is WHY did Lloyd George cave in so easily to the bankers by phasing out the issuance of debt-free treasury money in favour of going back to agreeing to debt-creating loans from the private bankers?  What did they have on him which made him cave in so easily to their demands?  Was he frightened?  Possibly.  Was he being blackmailed for his well known penchant and weakness for young women?  Again possibly.  Or was he a part of the game and a ‘sleeper’ for the Rothschild Zionist ambitions for a Jewish ‘homeland’ state in Palestine along with the whole ‘Illuminati‘ satanic globalist approach and agenda to international affairs?  Well, in my opinion, it’s a very real possibility.   In Lloyd George’s war memoirs concerning his actions as Chancellor of the Exchequer, he emphasises that he had an historic disagreement with Lord Rothschild.  On page 104 he writes: END_OF_DOCUMENT_TOKEN_TO_BE_REPLACED